Joining the fight against famine 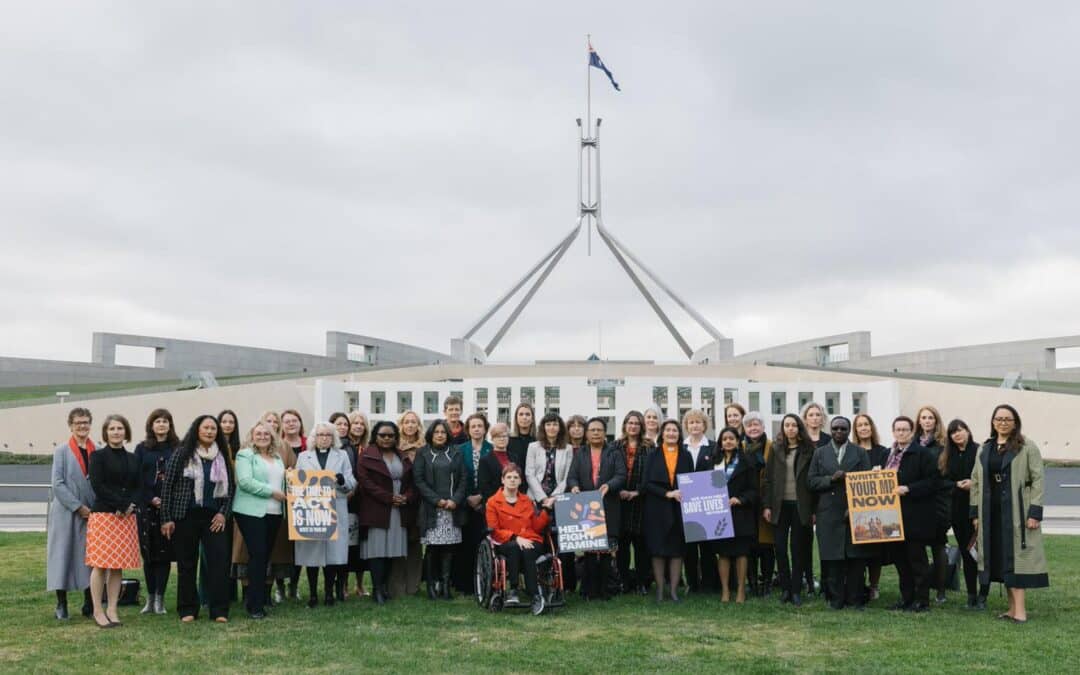 Photo: The Womens Leaders Delegation out the front of the Parliament House this week.

Anne Simpson, Network Engagement Ministry leader, joined influential women across the Australian Church in Canberra this week to advocate for the world’s most vulnerable people.

The 4th annual Micah Women Leaders Delegation brought together 37 leaders to advocate for the Help Fight Famine Campaign. Launched by Micah Australia this year, the campaign is calling on the Australian Government to contribute $150 million to prevent famine in five at-risk countries. “One of the distinctives of Churches of Christ across the world is our commitment to working with others in the body of Christ for the common good. I can think of no greater way we can express our solidarity than to speak up for the needs of the world’s most vulnerable people,” Anne (picture right) says.

“We were received graciously by those we met with, and we were encouraged by their concern for the plight of those in our world today who are daily facing the threat of starvation. We pray they will be moved to act.”

More than 40 meetings with Members of Parliament expressed the concern of churches and development agencies represented that delaying action would cost the lives of the world’s poorest people in Somalia, Ethiopia, Yemen, South Sudan and Afghanistan.

The Fight Famine Campaign is driven by the unprecedented increase in acute food insecurity faced by 345 million people worldwide. This week, the UN announced that Somalia would likely be facing an extreme famine declaration by the year’s end.

“Conflict, COVID, climate shocks and the war in Ukraine have converged to create the perfect storm for an unprecedented crisis,” said Carly Smith, senior lobbyist for Micah Australia.

“Our prayer as women leaders is to steward the voices of those facing this crisis well. It is an honour to be able to bring this voice to Parliament on behalf of our brothers and sisters around the world, and we believe it is a Biblical call to do so. There is something so powerful about Christian women leaders bringing this message to our nation’s leaders.”

Micah Australia is a coalition of Christian international development agencies under the leadership of Rev. Tim Costello. It empowers Australian Christians to advocate for the most urgent global justice issues facing the world today.

Global Mission Partners, the aid and development body of Churches of Christ in Australia, is a long-time partner of Micah Australia.